This last chapter really needs to be read in the context of the other gospel accounts.  Although Luke has been detailed in his whole account, he is quite abbreviated here in the last chapter.
If we just read Luke’s account we would be left thinking that the two on the road to Emma's went back to Jerusalem the evening that Jesus rose from the dead  (which they did- 24:33), then he appeared to them all (vs 36) and led them out to Bethany (vs 51), all on the same evening!
Maybe Luke was abbreviated in his conclusion because he was getting ready to start writing Acts.  There, in the first chapter, he writes that Jesus appeared “to them during forty days and speaking about the kingdom of God.” (Acts 1:3)

With that sentence in Acts, we see that Luke knew a lot happened between Jesus breaking the bread (Luke 24:35) and “as they were talking about these things (vs 36).  We learn in other accounts that the disciples had left Jerusalem and went back to their work up in the Sea of Galilee, aka Tiberius (Matt. 28:16 & John 21:1).

I found a time line that can be helpful to see how different accounts don’t contradict each other. The different accounts just demonstrate points of view that each writer felt were important to include.
If it's hard to read, you can find it in the article on this link: https://answersingenesis.org/jesus-christ/resurrection/the-sequence-of-christs-post-resurrection-appearances/ 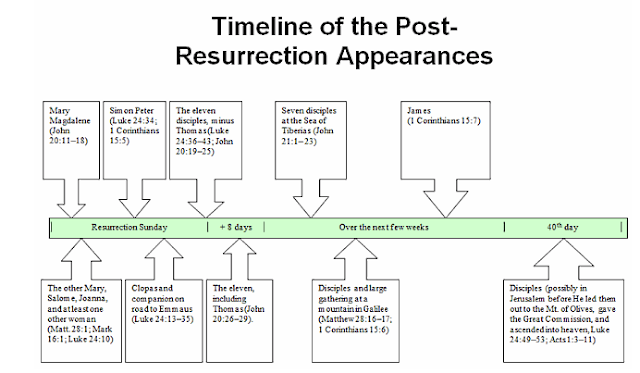 Rapster J said…
That is very helpful. So thankful for people who put together those types of things!
March 6, 2018 at 9:14 AM

Revelation 6- 12- Watch a great review of what we have read so far!

May 17, 2020
At this point, you might be getting anxious reading John's vision or you are getting very confused.  Perhaps, like me, you are excited!!

Through the many times I have read Revelation, I have gone through different teachings and discovered the many different ways people interpret Revelation. There is predominant teaching in our US Christian culture today that became very popular from the Left Behind book series published in 1995.  The thought is that there will be a rapture of believers at an unknown time. With Christians out of the way, all the plagues of the seals, trumpets, and bowls will occur in chronological order in a 7 year period. During that time there will be new converts to Christianity. Christ will then return and rule for 1000 years only to then have to once again engage in battle and finally defeat Satan and Satan's followers.   At the end of the 1000 years will be the judgment of all mankind.