July 24, 2017
Just as Moses lifted up the snake in the desert, so the Son of Man must be lifted up, that everyone who believes in him may have eternal life.” (3:14)

I thought I would give you some interesting background I discovered regarding the snake on the stick.

The story of Moses lifting the snake can be found in Numbers 21:9.  If the Israelites, who were being bitten by venomous snakes, looked at the bronze snake, they would live and not die from the bites.
Pretty cool foreshadowing on God’s part, don’t you think?! Even in the time of Moses, He is looking ahead to his Son, Jesus, fulfilling his plan.

What you might not know is that the Israelites kept the bronze snake along with other holy items like the Ark of the Covenant filled with some manna in a gold jar and Aaron’s staff (Romans 9:4), etc..
They kept that bronze snake for almost 700 years!!!!!
But, as you can imagine, the generations that followed after the generation that got healed by God, started thinking the healing came from the snake.  So they started worshipping the snake😟.
King Hezekiah (715-686 BC) figured this out and had the snake smashed to pieces because he followed the Lord and wanted his people to do so as well. (2 Kings 18:4).  Can you imagine how mad some people would have been at the king because he destroyed such an ancient relic?

Well, here is something else I discovered in my research on the snake.  Being that I am a nurse, I used to wear a necklace charm that depicted my career in medicine. 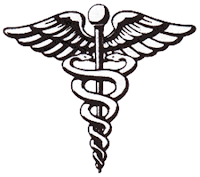 I wondered how the medical profession got that symbol so I Goggled it.
In Greek mythology, the Rod of Asclepius (a serpent-entwined rod) is associated with healing and medicine. (Not hard to figure where that idea came from!) I wondered when Greek mythology was first written.  Although they say that it has been around since 2000 BC, nothing was written until the 700’s BC.  Isn’t that interesting?  Written mythology was written after Hezekiah destroyed the bronze snake.
Can you see how mythology is just a re-invention of God’s supreme story?  Satan is such a copycat!  Yet, he twists his stories to turn you away from God.

Back to the medical symbol.  You are probably thinking…yeah, but that has two snakes and wings….
Well, two snakes means commerce and trade,…nothing to do with medicine.  So people got confused when they picked the symbol for medicine.  😝  Wouldn’t that be just like Satan to confuse people.  “I don’t want them to see the connection to Christ so I will skew it just a little  bit.”
The American Medical Association did get their image right, yet they still explain it away from Christ.
“The snake symbolizes rejuvenation, because the snake sheds it’s skin, or, snake bites have healing properties.  The rod has to do with a doctor-god who carried a rod with him.” 🙄
Sounds like they are reaching……

People just need to look to John 3:14 for the real meaning!!!

Rapster J said…
Very interesting! Many people somehow believe a lot of the stories in the Bible (including Jesus) are versions of ancient legends- all the people-nations are really worshipping the same god, etc. More deception for those who haven't read either the Bible OR the "legends"!
July 24, 2017 at 9:51 AM

Walking with The Way said…
Paul was even concerned about believers getting deceived, "I am afraid that just as Eve was deceived by the serpent's cunning, your minds may somehow be led astray from your sincere and pure devotion to Christ." 2 Cor. 11:3

Jasmine Hadley said…
We are at John! So cool!
WOW! I never thought about that... I love that you brought this to attention because Satan is such a little copycat! What a blessing it is to have Gods word and truth to know the right meaning.
I love reading through Chapter 2 again to see the first signs of Jesus as he was launching His public ministry!
July 24, 2017 at 4:23 PM

Walking with The Way said…
I always enjoy reading the story about Jesus turning the water to wine.
I love how his mom tells the servants, "Do whatever he tells you." (2:5)
Doesn't that just open your mind to the possibilities of what he did as a child or teen that led her to believe he could do anything!?
She already knows he is from God, as we read in her song in Luke 1:46-55. She so completely believed it, she had no doubts!
Such a sweet little glimps of her relationship with him now when he is 30 years old.
July 24, 2017 at 5:29 PM

Walking with The Way said…
Here was a question/comment posed to me:

Matthew and John give two different accounts as to how Jesus met Andrew and his brother Simon.

Here is my thought in the matter:

At first read through, it does seem like the stories are different. However, if you read through all four accounts of how Jesus called Peter to follow him, I wouldn't say the stories conflict but rather I see each writer giving different details of the same event.
When I read Matthews version, he says, "At once they left their nets and followed him" (4:18). Well, that seems a little abrupt, doesn't it? Maybe more happened before they dropped everything and followed.
This is how I see it happened:
John the Baptist had two of his disciples with him when he said "Look the Lamb of God!"
(1:35) Andrew is one of John's disciples first before he becomes a disciple of Jesus!
He may have been there and witnessed when Jesus got baptized. He is already aware that John is saying "This guy is bigger than me!!"
So after spending the day with Jesus, Andrew goes home around 4pm (the tenth hour) because he knows it's time to help in the family business of fishing. They are out on the water all night. I bet Andrew is going on and on about this man, Jesus that John the Baptist is talking about! So they fish all night but they don't catch anything (Luke 5:5).
They are pulling up their boats in the morning when they see a crowd following a man. Andrew, in his excitement, takes Peter over to Jesus and introduces him (John 1:42) and Jesus asks if he could use their boat for a bit, saying "Just push out a little bit so the people can still hear me talk". So, Peter does it because Andrew is nudging his brother saying, "This is the guy I've been telling you about all night!!!"
So Peter gets to hear first hand and in an up-front spot all the teaching Jesus gives to the crowd. When Jesus is done teaching he turns to Peter and tells him to go out to deeper water to catch some fish. (You can read how that turns out in Luke 5:5-11). Then, Jesus gives him the name Peter (John 1:42) and says, "Come follow me" (Matt 4:18).
Well, after all that happens, now I can see why they would immediately leave their nets and follow Jesus (Mark 1:18).
I am glad there are four different accounts so we could get the whole picture!!! Men can be so short in their descriptions of things! I'm telling you, if this story was written by a lady, we would get EVERY detail in one version!
But, then, the book would be really long! And there are always those type of people who don't want all the detail and say, just cut to the chase!
I am a woman. I LOVE detail!!! So I'm super glad we have all four versions! 😉
July 24, 2017 at 6:24 PM

October 18, 2017
Hello All! I will be the guest blogger for the next week and I am excited to participate on this great platform!
Luke 16 started off with the Parable of the Shrewd Manager. This is not a parable that my mind often reflects upon during my day to day life, as opposed to the Sowing of the Seed, or the Prodigal Son. However, the message of this parable encourages us to desire heavenly riches and not earthy riches and therefore the message is of great importance and should be committed to memory.
At first, I read the parable as I would read the Prodigal son, in which I would be the prodigal son (here the manager) and God is the welcoming Father (here the rich man). However, upon further inspection, I do not believe that the rich man resembles God, nor are we encouraged to act as the manager did. First, I find it unlikely that Jesus would compare his all-knowing Father to an aloof rich man who is oblivious to the management of his money and personal assets. Second, Jesus would not encourage …
Read more